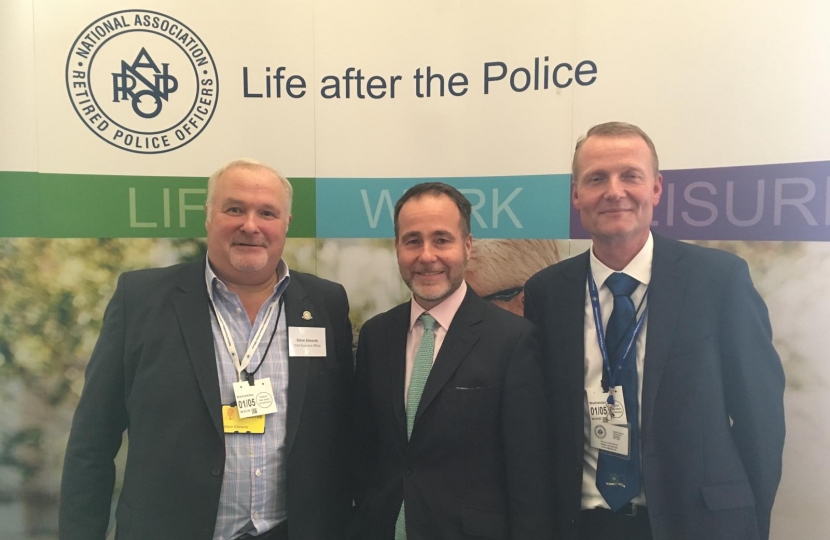 The National Association for Retired Police Officers (NARPO) represents nearly 90,000 former police officers of all ranks, together with their widows, widowers and former partners.  A number of serving officers, ex-police officers and their family members notified me about an event being held in Westminster by NARPO.

I attended the event to find out more and to see what I can do to help.  Following a change to the Police Pension Regulations, there are now three different approaches to survivors’ pensions in the United Kingdom and what happens if an individual remarries, co-habits or forms a civil partnership after the death of their spouse.

In Northern Ireland all police widows retain their survivor’s pension upon remarriage, co-habitation or civil partnership irrespective of the circumstances of the death of their spouse. Whereas throughout the rest of the United Kingdom, the pension is only retained if the death of the spouse occurred on duty or as a result of an injury on duty. To further complicate matters in England and Wales the pension is only retained if the remarriage or cohabitation occurred after 1st April 2015, whereas in Scotland there is no such restriction. It is a mixed policy making it challenging for police to plan ahead.

The drop-in session shed a light on the impact the changes can have, particularly if an officer dies whilst in work or receipt of pension. It seems sensible that all police widows and widowers are treated the same throughout the United Kingdom. Their contribution to public service often goes unrecognised but they provide crucial support to their spouses in conducting their roles, both emotionally and practically.

It will be a challenge to find money which has not been put away in the pension scheme to bring about the relevant changes but I will liaise with Ministers in the Home Office and Treasury to explore the options.  I hope that some adjustment can be made to help police officers and their partners to feel clearer about their future.