Ship building in the United Kingdom 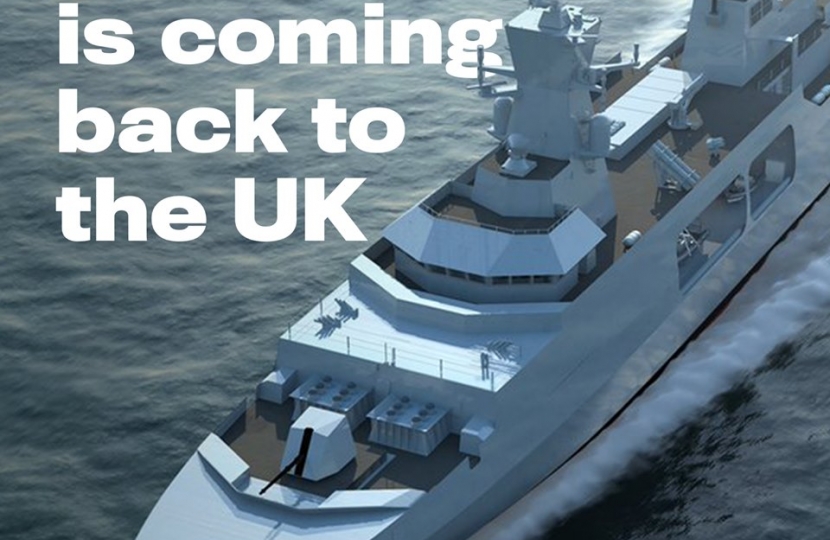 A number of you from forces and industrial backgrounds have written to me about the importance of keeping shipbuilding and defence projects to companies operating inside the United Kingdom.  I know many of you have a particular interest in ensuring that MOD projects are primarily built and tested here in our country.

You will no doubt be pleased to hear that new warships for the Royal Navy will be built in the United Kingdom securing thousands of jobs for people at British shipyards and ensuring that we remain a global, outward looking nation as we leave the EU.

New Type 31 frigates to be used by the Royal Navy will be built exclusively in the United Kingdom with the first 'in the water' by 2023.  These ships will reinvigorate our Navy fleet and support over 2500 jobs.  It will also ensure that we have a sustainable skills base for shipbuilding and see that our shipyards continue to be world-class, able to compete for all Government contracts and all around the world.

This particular project had been put up for tender across the EU, which is what had prompted many residents to write to me.  While the Government was always clear that no defence sensitive works would be built abroad, instead built and fitted in the United Kingdom, it is brilliant to see that a British company still went ahead to win the award outright.

I will continue to lobby the Prime Minister to ensure that British firms not only continue to develop so they can win procurement contracts but that they are also able to provide top quality products and good value for money for wider audiences as we Brexit and begin trading on a greater scale, with the wider world.