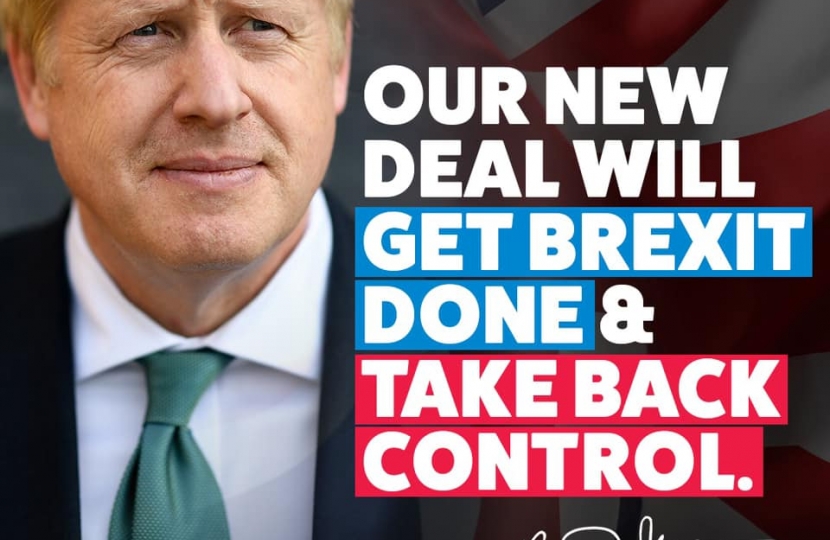 We have got a great new Brexit deal that takes back control - now Parliament should get Brexit done on Saturday  so we can then focus on the people’s priorities including the cost of living, the NHS, violent crime and the environment.

Many said Boris couldn’t do it, 85 days since becoming Prime Minister and he has!

The new deal ensures that we maintain control of our laws, trade borders and money without disruption.  It provides the basis of a new relationship with the EU based on free trade and friendly cooperation.

Under the previous deal, Brussels had ultimate control and would have forced Britain to accept EU laws and taxes forever.  This new deal ensures that the voters here in the United Kingdom are in control.

We will leave the EU Custom's Union as one United Kingdom and be able to strike trade deals all around the world.

This is a big win for our Prime Minister who forced Brussels to reopen the deal, something many said was impossible.  He has ensured that we will no longer be bound by EU laws, he has ended the supremacy of the European Courts in Britain, removed the anti-democratic backstop and ensured that the people of Northern Ireland are in control of the laws they live by and will remain forever part of the United Kingdom customs territory.

All of this was said to be impossible but he's done it.  Well done Mr Johnson!

I will be backing the Deal in the votes on Saturday but if you would like to read up on all the fine details yourself (avoiding the media spin) please see the attachments below.

For specifics on Northern Ireland, visit:

Christopher Pincher MP has welcomed the news that the Conservative Government has delivered on its manifesto pledge to enshrine the historic £33.9 billion funding boost for the NHS into law.