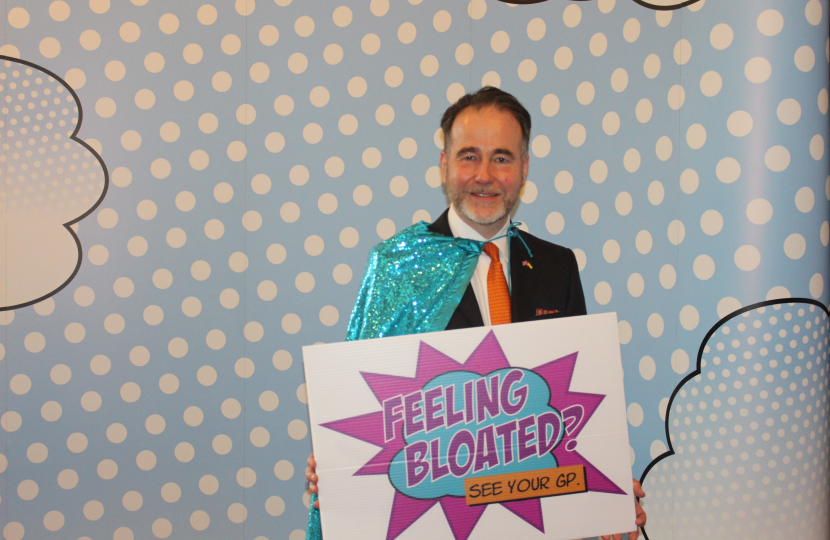 Christopher Pincher MP has shown his super-powered support for women with ovarian cancer across Tamworth at a special event hosted by the All-Party Parliamentary Group (APPG) on Ovarian Cancer on Wednesday 2 March.

MPs were given the chance to dress as ‘teal heroes’ to raise awareness of the symptoms of ovarian cancer at an event organised for Ovarian Cancer Awareness Month in March.

Teal is the colour of ovarian cancer awareness, which continues to be alarmingly low in the United Kingdom. Data from Target Ovarian Cancer, which provides the secretariat for the APPG, shows just one in five women can name bloating as one of the key symptoms of the disease.

The symptoms of ovarian cancer are:

Christopher Pincher said: “Over 4,000 women in the United Kingdom die of ovarian cancer each year, and awareness of the key symptoms remains too low. We must come together and act now to make sure everyone knows what look out for, and that those affected by ovarian cancer face better outcomes. That’s why I was delighted to join others and take part in this year’s Teal Hero event with Target Ovarian Cancer to create positive progress.”

Sharon Hodgson MP, Chair of the APPG on Ovarian Cancer and host of the Teal Heroes event in Westminster, said: “I’m proud to once again become a Teal Hero to raise awareness of ovarian cancer and help more women get an early diagnosis. It is vital that everyone is aware of the symptoms of ovarian cancer, and I am delighted that my colleagues have joined me at today’s event.”

Alexandra Holden, Deputy Chief Executive of Target Ovarian Cancer, said: “It’s been brilliant to see MPs become awareness superheroes today. We know that much more needs to be done to increase awareness of ovarian cancer and save lives. It is so important that we continue to come together at events like this to work to transform the future of ovarian cancer. We look forward to continuing to work with these MPs to make improvements in diagnosis and survival that women with ovarian cancer and their families deserve.”

Over 7,000 women are diagnosed each year in the United Kingdom, and over 4,000 women lose their lives each year. Target Ovarian Cancer works to raise the profile of ovarian cancer, spread the word about the symptoms, and train GPs in early diagnosis. Visit targetovariancancer.org.uk to find out more.