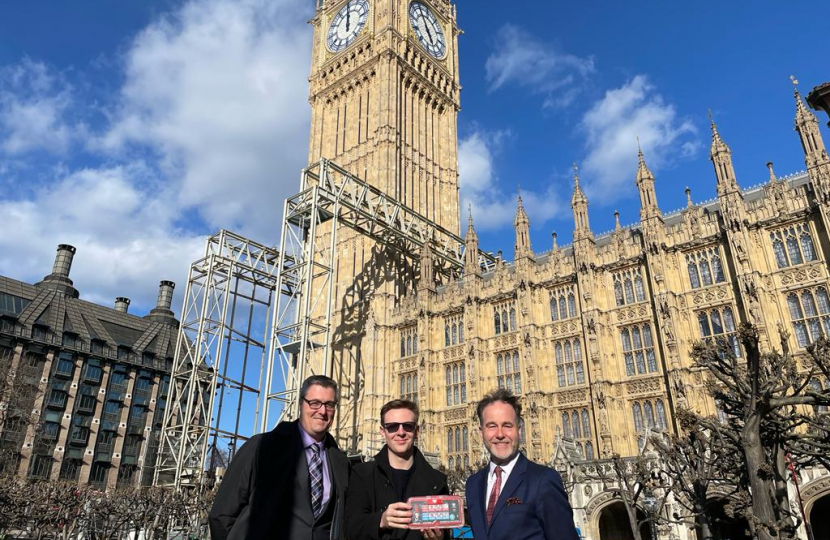 Christopher Pincher, Conservative MP for Tamworth, recently met with his local constituent, Benjamin Culff, to discuss how he can support local and national efforts to improve access to life-saving defibrillators across the UK.

Twenty-two-year-old Benjamin Culff was just 17 when he suffered a sudden cardiac arrest at the hotel he worked in. Benjamin was a regular gym-goer, he was fit and strong – but as he walked to collect some glasses for the customers he was serving, he suddenly collapsed.

Thanks to his colleagues’ quick thinking, training and the instillation of an on-site defibrillator, Benjamin was given a second chance at life. Since then, Benjamin has become an advocate for CPR and defibrillator awareness and uses his story as a testament to show that anyone, anywhere, at any time can be in need of a defibrillator.

Unfortunately, Benjamin’s story is not unusual. There are too many examples of people dying of sudden cardiac arrest because they simply do not have access to defibrillators. According to the British Heart Foundation, in the UK, 60,000 sudden cardiac arrests happen out of hospital every year. The vast majority of them happen in the home (72%) or the workplace (15%) - with little to no warning.

Mr Pincher has been campaigning locally for a number of years to raise awareness of sudden cardiac arrest with local charities such as Tamworth Have a Heart. He was delighted to meet with Benjamin and Rapid Response Revival - who have created the world’s first personal portable defibrillator, CellAED - to discuss how the survival rates of sudden cardiac arrest can be improved. CellAED is a fraction of the price, size, and weight of current AED technologies, and is designed to improve the chances of surviving a cardiac arrest, increase access to defibrillators and overcome barriers to their use.

Christopher Pincher, MP for Tamworth said “Sudden cardiac arrest is one of the country’s biggest killers. It happens quickly, and kills rapidly. Without defibrillation, the chances of survival drop by 10% every minute. Without quick access to the right people, with the right equipment, people will continue to die unnecessarily. Readers will remember that a couple of years ago I ran a summer campaign on highlighting a different defibrillator a day across our town and villages. We saw new units installed, shone a light on unacceptable vandalism of others and received an endorsement from the CEO of the British Heart Foundation. There is a lot of work to do, and I am pleased to support local Tamworth resident, Benjamin and Rapid Response Revival’s  efforts to raise awareness and improve access to these live-saving devices.”

Benjamin Culff, said, “It was a pleasure to meet with my local MP Christopher Pincher who was very supportive of the work Rapid Response Revival® is doing. He has done so much in Tamworth to raise awareness of sudden cardiac arrest and the need for defibrillators which is extremely welcome by the community and by all of us at Tamworth Have a Heart.

Thanks to the quick action of my courageous colleagues and the fact that there was an onsite defibrillator in my workplace, I was given a second chance. Since my cardiac arrest, I have dreamt of there being a mini defibrillator that could be easily used in homes and offices and it’s amazing to see that Rapid Response Revival® has realised those dreams. My story is testament to the fact that sudden cardiac arrest really can strike anyone, anywhere at any time.”

Dr Steven Brooks, Chief Medical Officer of Rapid Response Revival® said, “Treating out-of-hospital cardiac arrest is a huge challenge in the UK. A lack of awareness is often compounded by barriers to defibrillator access. It was fantastic to meet with both Christopher Pincher and Benjamin to talk about how we can address these issues together. CellAED® uses new technology that has been created with the ultimate goal of improving the chances of surviving a sudden cardiac arrest, so that more people can access to a defibrillator in those critical few minutes.”