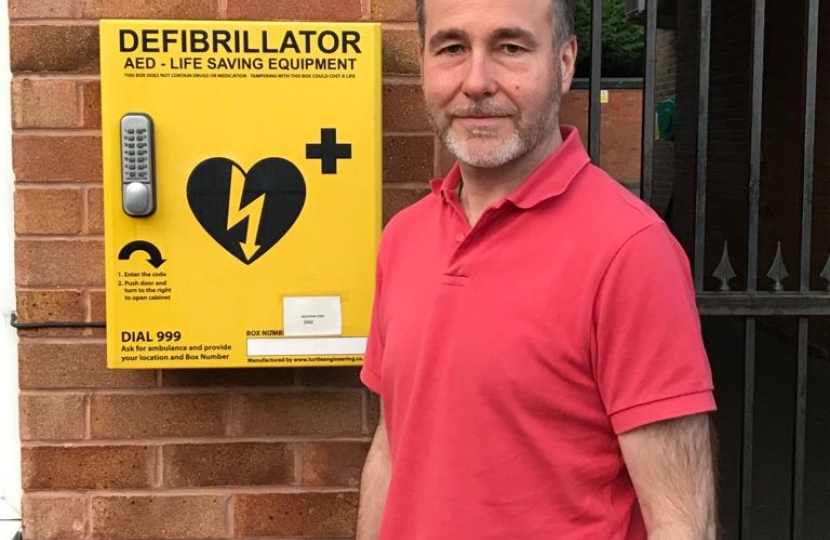 As Christopher Pincher MP’s Defib-A-Day campaign comes to a close, the Chief Executive of the British Heart Foundation Simon Gillespie has backed the campaign to highlight defibrillators.

Speaking to us, Christopher told us his campaign was born from meeting the team at Cardiac Risk for the Young, a charity that screens young people for unknown heart issues.  With 12 apparently healthy and young (35 and under) people dying suddenly every week from an undiagnosed heart defect, the Tamworth MP wanted to build on this to see how he could help those with heart issues in Tamworth and local villages.

Working closely with the Tamworth Have a Heart campaign and Tamworth Borough Council Mayor Cllr Richard Kingstone, they came up with a plan to encourage businesses to install their own defibrillators whilst also highlighting where they are in our local communities.

“It is fantastic to see Chris highlighting the location of a different defibrillator each day in his constituency this month. This shows a really admirable commitment to improving survival rates for out of hospital cardiac arrests. Currently, fewer than one in ten people in the UK survive an out of hospital cardiac arrest, and easy access to a defibrillator is absolutely critical in turning around this statistic.”

“As you have followed this month, I have been in and out of Tamworth and our villages highlighting these machines that save peoples lives. The response has been fantastic, with your phone calls and emails with your own personal stories.