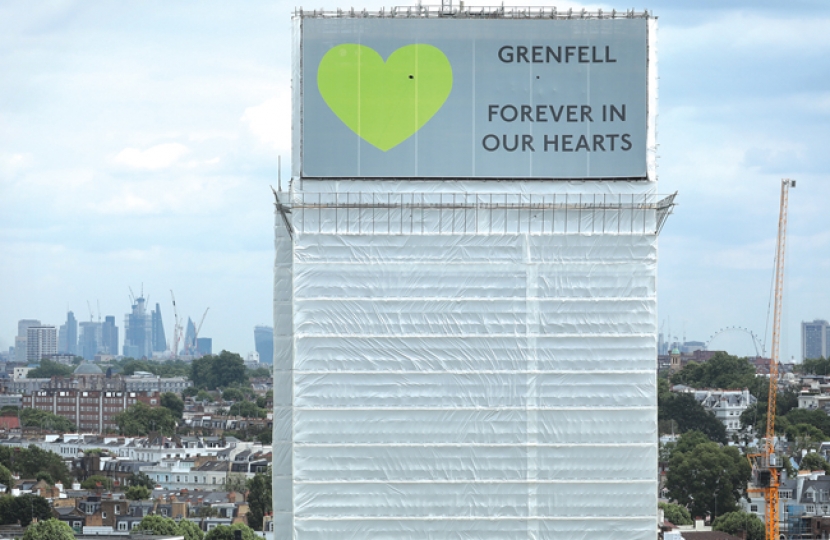 Many residents have written to me about the Grenfell Tower disaster. Here is my response:

I would first like to express my sincerest sympathies for those affected by the tragedy at Grenfell. My thoughts are with those who have lost loved ones, friends and homes. It is a sobering experience to drive by and see the ruins of the tower. I would also like to pay tribute to our fantastic emergency services who have worked so hard during such difficult circumstances.

Since the fire on 15th June I have received messages of concern from constituents regarding fire safety, especially at Tamworth's own local authority high rises on Lichfield Street. Because of the terrible events in West London, I have contacted Councillor Michelle Thurgood, portfolio folder for Housing Services at Tamworth Borough Council for further information on the Lichfield Street flats, although I am aware that both Anthony Goodwin, Chief Executive of Tamworth Borough Council and the Head of Landlord services have a good working relationship with Staffordshire Fire and Rescue and are continuing to liaise with them to address concerns.

Councillor Thurgood has confirmed to me that the high rises on Lichfield Street do not have cladding or gas supplies of the kind which contributed to the horror at Grenfell. I am also reassured that Tamworth Borough Council has worked alongside Staffordshire Fire and Rescue to ensure that all fire safety regulations are complied with, and that regular checks of fire doors and other safety measures are taken. Tamworth Borough Council remains committed to installing sprinklers in all council owned high rises.

My office has also spoken to a director of Staffordshire Fire and I am assured that they continue to take proactive action to address concerns on fire safety in high rise buildings in Staffordshire. This action includes (but is not limited to) written communication to local authorities, landlords and owners of high rise flats encouraging a review of fire safety policy and also encouraging a check that building regulations are being complied with, a county wide inspection list for local fire service teams to visit high rises in the Staffordshire area, including the six we have here in Tamworth, and a multi-agency meeting took place on Friday including local authorities and other housing associations to address to concerns and relevant issues. I have been offered a briefing following that meeting which I will take up with interest.

Staffordshire Fire and Rescue have also provided information on fire safety in high rises on their website, www.staffordshirefire.gov.uk, and I would strongly encourage all constituents with concerns to read through that information carefully. I would also encourage all constituents, whatever their accommodation to check their smoke alarms regularly and to make sure that they know what to do in the case of a fire, including where their nearest fire exit might be.

While I am reassured that at the local level our Council and Fire Service continue to be proactive and diligent on this issue, I do recognise that there needs to be a thorough investigation to find out what happened at Grenfell itself. As constituents may know, an independent public inquiry will take place chaired by a judge to get to the truth and provide justice for those who have suffered. The Prime Minister confirmed that the Government will pay for legal representation for those affected.

On a practical level, the Government is providing a £5,000 down-payment to each family whose home was destroyed to assist them with food, clothes and other essentials. All adults over 16 in these households are also provided with £500 in cash. Other cash payments are being paid out by the local authority on a discretionary basis. All those who have lost their homes have been offered emergency hotel accommodation; and all will be offered rehousing within three weeks. 164 suitable properties have been identified and they are being checked and made ready for people to move into. In the longer term, everyone whose home was destroyed will be guaranteed a new home on the same terms as the one they lost.

No figure can be placed on a lost life or a lost home, and it is vital that as well as an inquiry to discover the truth of what happened, lessons must be learnt from this tragedy. The Government is therefore developing a new strategy for resilience in major disasters, and introducing an independent public advocate for public disasters to act on behalf of bereaved families and support them at public inquests and inquiries.

I think also we must be careful not to rush to hasty judgments on the fire until the inquiry has reoprted. It is worth noting that though the cladding to Grenfell was made recently, the cladding attached to the Camden flats that were evacuated last weekend was made in 2006. So the problems so sadly exemplified at Grenfell may be very long term.

Finally, I would like to again reassure constituents here in Tamworth that Tamworth Borough Council and Staffordshire Fire and Rescue are working hard to ensure that the measures already in place to protect residents are robust and informed, while at the Parliamentary level I will continue to support the measures to help those affected by the fire at Grenfell both now and in the future.