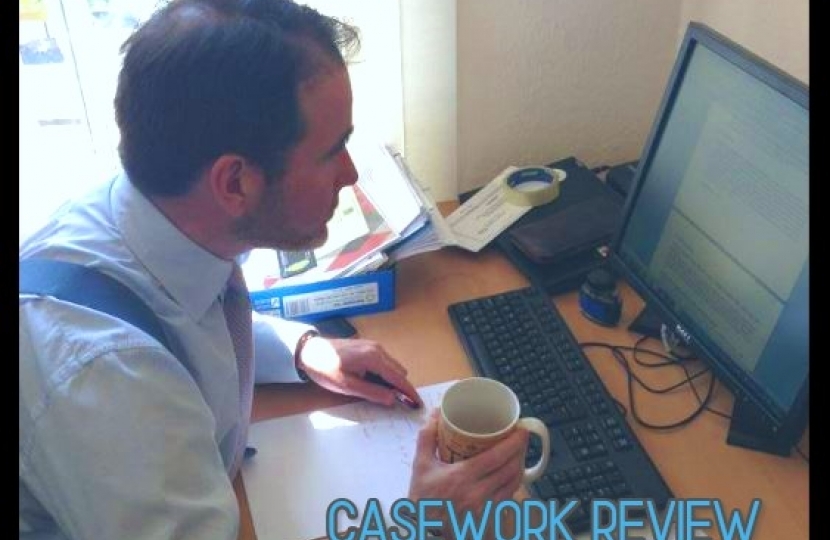 This is my last casework report under the current Parliament as I expect Parliament will dissolve next week for a General Election.

However, I find it worthwhile sharing some of the issues which have been crossing my desk over the past month.  In my casework there has been an increase in housing problems, this is partly because it is colder and people are spending more time indoors and partly because they need to get their heating and damp proofing in order before the winter weather sets in.   I have been liaising with both the Council and private landlords on this issue.

Speaking of the weather, flooding has of course been a concern.  While our flood plains do their job well, it is clear that on some stretches of road, close to the riversides, the surface flooding is bad and the sewer system is not managing.  The Highways Team at Staffordshire County Council are currently reviewing some of the worst affected areas and working closely with both Severn Trent Water and groups like the Environment Agency to reduce flooding across the area. Work begins on Plantation Lane very soon.

WASPI was high on the agenda, particularly with the court case outcome.  I would encourage any women who felt they had not received adequate communication to still follow the regular procedures of raising the issue with the DWP as a formal complaint, they can then follow up on your individual case.  I am happy to escalate the case to the Independent Case Examiner or Ombudsman if necessary.

The vacant seat scheme has been raised a number of times.  This is because a change in legislation to make buses wheelchair accessible has meant some of the smaller buses in rural areas no longer qualify for public service use.  The County Council is in discussion with the Department for Transport on the issue.  For now the scheme will continue with full access to the scheme for students currently needing the transport.

TV Licenses have also been raised, while the decision remains with the BBC on concessions, the Government continues to urge the BBC to reconsider offering concessionary support to those over 75 and those on a low income.  There were a few complaints about the Speaker, in particular whether he was colluding with the EU - while he had not broken any rules I suspect a few of you will be pleased that he has finally left the seat.

Settled Status claims queries also rose this month, there had been some delays in processing but they are now largely on track.  I am happy to assist with any Europeans who have applied and are finding their claims have been delayed.  I would need to know the application number and your personal details.

Rural broadband was raised, some good progress on this with more fibre being rolled out.  On the issue of rural access, I know many of you make use of phone services, the new rural mobile scheme should soon ensure that all of our villages have full phone access.  Great news for farmers out in the fields.

Finally there were a growing number of queries on the future of HS2, whilst I cannot comment much as the project is under review, current work on the lines continue.  If you are affected by HS2 are have queries, I can still raise them directly with HS2 Ltd .

Campaigns had some new topics this month, voter ID (if it is implemented, it will be free to get photo ID), concerns about the Hong Kong protests and what our Government can do to assist, protecting the NHS after Brexit and Thomas Cook.  It is great to know that Hays Travel has now taken over the old Thomas Cook site maintaining jobs and helping those who had booked, continue their holiday.

Abortions in Northern Ireland had been raised again, along with Beer Duty and of course wider Brexit issues.  Over the past few months, Beer Duty has certainly been the most popular campaign in my letterbox, so well done to those behind it.  I am doing what I can to lobby the Treasury to keep duties on alcohol as low as possible.

From November 6th, I will not be an MP, rather a Parliamentary candidate but I am still happy to do all I can to assist residents.  Please do let me know if I can help you in any way.

I have been surveying residents in villages across my constituency and it is clear that mobile signal is a key problem.