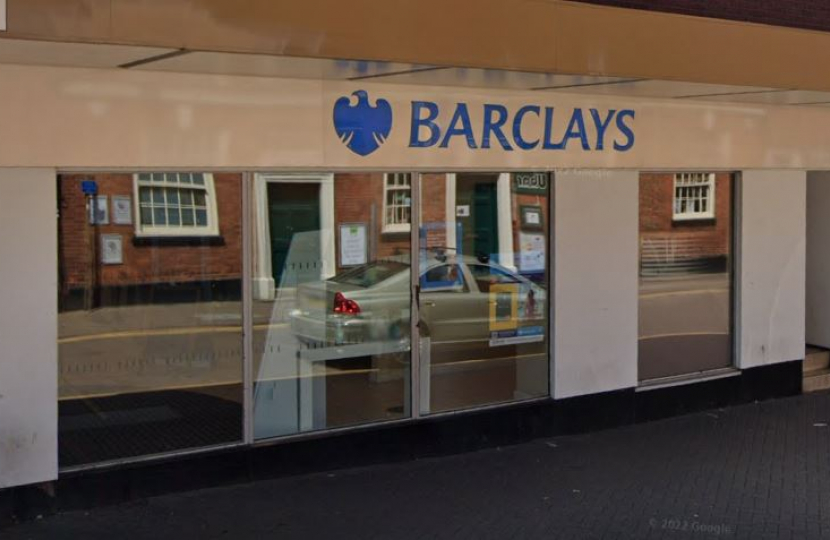 Residents may recall the news in August that Barclays Bank is planning to close its Tamworth Branch on Wednesday 23 November.  Tamworth's Member of Parliament, Christopher Pincher contacted Barclays directly to query this decision and has arranged to meet the Head of Corporate Relations at Barclays later this month.

As part of the case he made to Barclays, Mr Pincher said “Tamworth is Staffordshire’s second most populous centre, with an ever-growing population due to high levels of employment, business creation and an excellent geographical location.  The Town Centre, under the leadership of Tamworth Borough Council, is about to receive over £21 million to reinvigorate and revitalise our High Street.  It is a great shame to see Barclays will not be involved in the future of our high street or the future of our town.”

Following the announcement Mr Pincher wrote to other big names on our high street as part of a campaign for local banking for Tamworth.  His letters went to all local banks, building societies as well as the Staffordshire Chamber of Commerce and Tamworth Borough Council.  He asked the banks to commit to maintaining a presence in the town.

So far, in response to the MP’s correspondence, Coventry Building Society confirmed its commitment and investment in the Tamworth Branch, Lloyds Bank and Natwest have also confirmed that they have no plans to close the local branch.

Handelsbanken, a business and relationship based bank have also confirmed their commitment to Tamworth while Nationwide Building Society has committed to Tamworth until at least 2024 and it will shortly move to a new town centre premises.  HSBC and Santander have not yet made similar commitments to the town.  Metrobank, which does not currently have a branch in Tamworth, says it does not have plans to open one. 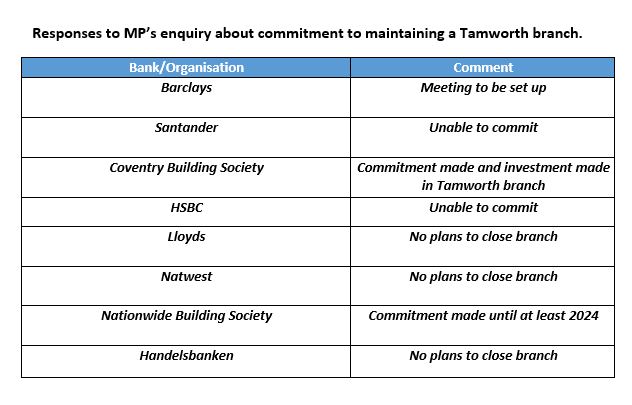 Mr Pincher said “I am very pleased to receive positive responses from Coventry Building Society, Nationwide, Lloyds Bank and Natwest.  I hope knowing which banks are most committed to our town will help local people make their choices for them when it comes to local banking.  It is vitally important that banks keep a local presence in our town because not everyone is online or feels comfortable using technology.  People and businesses must be able to talk to bank staff face to face.  I will write to local businesses and groups with the information I have received, and I will encourage them to do their business only with local banks.  That will show the bank bosses the value of keeping services local.”

It is very much the case that the majority of bank users now access their accounts online, through apps or over the phone.  This means that demand for high street premises has dropped.

It was great to see the town come together for Tamworth's Christmas lights.

Stalls organised by Tamworth Lions, helping to fundraise for charities across our area.

Entertainment from Rock School, D-Day Juniors, Bryan Brindley and the one and only Tamworth Pantomime company.