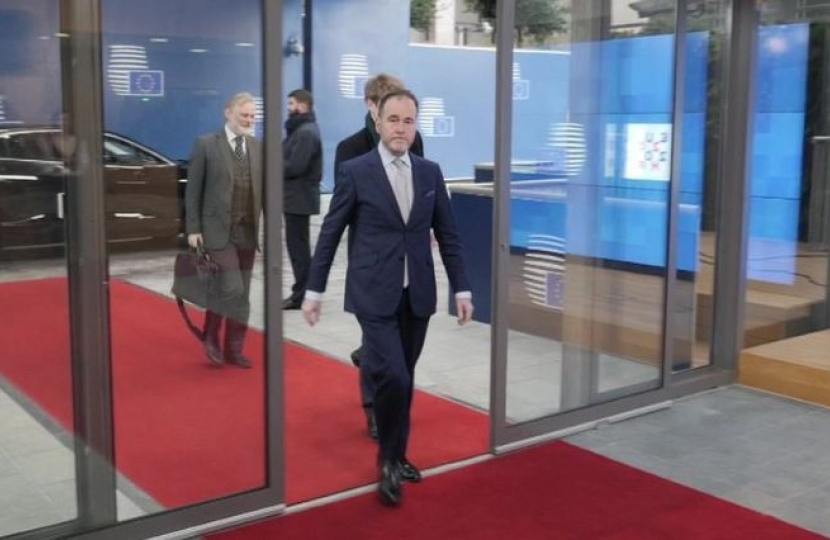 I have no intention of stopping, delaying or reversing the United Kingdom's exit from the EU. The British people voted in an historic referendum in 2016 to leave the EU and reassert our sovereignty.  That is what the Government intends to deliver and it is what I will be working to achieve in Parliament. I also voted to leave and campaigned for Leave in Tamworth.

The Prime Minister has been clear that leaving the EU means leaving the single market and the customs union.  That is what we must do and it is what, given the nature of the negotiations, the EU says it wants us to do too. I was elected on a manifesto commitment last year to deliver that. Both the Leave and the Remain campaigns were also clear during the referendum what a vote to leave the EU would mean. So I do not believe those who claim that the public was misled or did not know its own mind or what it wanted.  The majority wanted to leave the EU and that decision must be honoured.

After we leave the EU, movement will end, the jurisdiction of the European Court of Justice will no longer apply and we will no longer send vast sums of money to the EU. An implementation period will give companies in the United Kingdom and Europe time to adjust to new arrangements.  This is a sensible step.

We will soon be able to make our own trade deals for the first time in over 40 years.  That is important because the European Commission has predicted that 90 per cent of future world growth will come from outside of Europe. While as frictionless trade as possible with the EU must be secured, I also look forward to making our own independent trade policy as soon as possible.

The Referendum in 2016 clearly divided opinion.  We must now work to bring the country and our communities back together as we leave the EU. That is the best way to generate individual optimism, greater business success and a forwarded looking, outward facing, determined United Kingdom.

FOR Theresa May's deal.  This is the most realistic prospect for us leaving the EU without disruption and uncertainty

AGAINST extending Article 50.  Lengthening the process will not help the situation.

FOR keeping 'no deal' on the table.  In order to negotiate successfully, this still needs to be on the table. A no deal Brexit, though not preferred could be prepared for and various Departments are working to keep this as smooth as possible if this does occur.

Brexit - what happens next

Last night I voted to back the Prime Minister's deal.  I feel it is time to come together, get Brexit done and move on as a country.

It has been a busy few weeks on the Brexit front and I know the matter can be confusing, so I hope to provide a little more clarity for you.

Today MPs will have an opportunity to respect the result of the referendum, take back control and get Brexit done in an orderly and friendly way.

On Saturday I attended Westminster with the full intention of voting for a Brexit Deal. It was disappointing that once again, Labour, the Liberal Democrats and the SNP voted to stop Brexit - going against the democratic will of the British people AGAIN.

We have got a great new Brexit deal that takes back control - now Parliament should get Brexit done on Saturday  so we can then focus on the people’s priorities including the cost of living, the NHS, violent crime and the environment.

We will deliver on Britain’s priorities and we will Get Brexit Done.

Joining our troops in Cyprus

As Minister for Europe, Christopher Pincher MP recently visited Cyprus to meet with Cypriot leaders, as well as visit Mercian troops at the British Forces Headquarters.

Ship building in the United Kingdom

A number of you from forces and industrial backgrounds have written to me about the importance of keeping shipbuilding and defence projects to companies operating inside the United Kingdom.  I know many of you have a particular interest in ensuring that MOD projects are primarily built and tested

View From the House - September 9th

Hello and welcome back to my weekly View from the House for Tamworth Informed. The summer recess has been incredibly busy, with a lot of changes. I signed off my last View from the House saying there would be lots of news to report, I do not think I am wrong!

The path to Brexit

The votes in the House this week show there is a clear choice on Brexit.

Only Boris Johnson and the Conservatives will get Brexit done and move forward.

The choice is clear - BACK BORIS, GET BREXIT

Today the Chancellor set out a review on spending.  This is not a budget but an insight into a change in direction on public policy and Government spending.