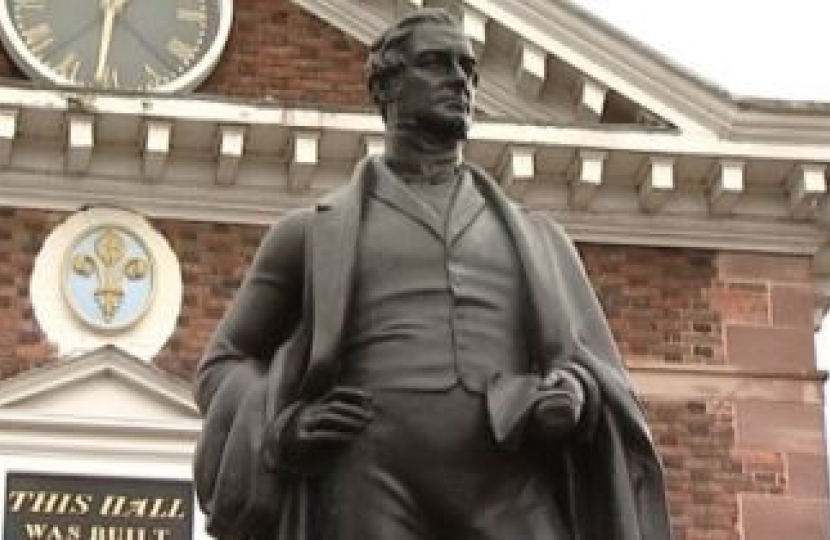 Tamworth and its History

Tamworth has an exciting and vibrant history: it was the seat of Kings, the birthplace of the modern Conservative Party, and the original home for the Reliant Robins. Today it boasts the largest indoor ski slope - the snowdome - in Britain.

One of the parts of our constituency with the oldest history is essentially a road: Watling Street – a major arterial road entering the constituency in Wilnecote and leaving just past the village of Shenstone. Watling Street, originally constructed by the ancient Britons and then paved by the Romans, was also the boundary between the Danes and Anglo-Saxons (known as the Danelagh boundary). The daughter of King Alfred the Great, Aethelflaeda ultimately seized Watling Street from the Danes.

In this Saxon era Tamworth was the capital of the ancient kingdom of Mercia. During this time England was a Heptarchy – meaning there were seven kingdoms. In the reign of King Offa, Mercia reached its zenith and the kingdom was the largest in England. It was located in the heart of England and stretched from East Anglia in the East to Wales in the West, and from Northumbria in the North to Wessex in the South. Offa's dyke, an earthen structure, separating Wales from England was completed in Offa's reign. Eventually Mercia was taken over by the Kingdom of Wessex which eventually became the England we know today. The Mercian Flag – the Flag of St Alban – still flies from Tamworth Castle today and recently the Mercian Regiment (an amalgamation of regiments including the Staffords) was formed in Tamworth in the presence of the Prince of Wales.

After the invasion of William the Conqueror in 1066 the Norman's built a castle on a site which was used by Aethelflaeda as a strategic fortification as it was located next to the town's two rivers: the Tame and Anker. The castle has been through many renovations and alterations over the centuries by the various families who have lived in the castle. One of the most influential families to inhabit the castle during the mediæval period was the Marmion family which name is familiar to many local residents – Marmion House is the location of Tamworth Borough Council. During the English Civil War the Castle – and consequently the town – was held by Royalist forces, until Parliamentarian forces captured the castle in 1643. The Castle has hosted many royal guests including, most recently, the Prince of Wales and it still stands proudly next to the centre of the town. For more information relating specifically to the Castle please visit its website (http://www.tamworthcastle.co.uk/ ).

Three further iconic and historical buildings in Tamworth are the Assembly Rooms, the Town Hall and St Editha's Church. The first was built to commemorate Queen Victoria's Golden Jubilee in 1887 and currently serves as a live entertainment venue but it has also hosted a luncheon for the Duke of York (before he was King George VI) and has been a site for suffragette protests. The Town Hall was funded by Thomas Guy (a former MP for Tamworth) and amendments were funded by the first Sir Robert Peel. The Town Hall is still used for civic functions. St Editha's Church dominates the town centre and the history of the Parish of St Editha dates back over a thousand years to Saxon times. It is alleged that the King's Champion and Lord of Tamworth Castle, Robert de Marmion, played a significant part in the Church's construction.

In the Victorian era the town's then Member of Parliament, Sir Robert Peel, issued the Tamworth Manifesto – outlining the foundations of the modern Conservative Party – in 1834 from Tamworth's Town Hall. The Manifesto Speech can be read here. The synopsis is that the Conservative Party would reform where necessary but not administer unnecessary change which would lead to a "perpetual vortex of agitation". This separated Peel's strand of Conservatism from that of the Duke of Wellington's. Sir Robert Peel lived in nearby Drayton Manor which is now the location of a theme park.

In 1854 one of Wigginton's (a village near Tamworth and in the Constituency) residents, Private Samuel Parkes, was awarded a Victoria Cross in the Charge of the Light Brigade, the citation in the London Gazette can be read here.

Another gallant son of Tamworth is Able Seaman Colin Grazier. Able Seaman Grazier lost his life while serving on HMS Petard when he and Lt Anthony Fasson retrieved German codebooks from a sinking Nazi U-Boat. These codebooks were used to crack the Enigma Code at Bletchley Park and helped win the Battle of the Atlantic. Able Seaman Grazier and his colleagues are remembered outside St Editha's church with a memorial.

Most recently The Reliant Motor Company was founded in the town by T. L. Williams in 1935. Reliant manufactured the iconic Reliant Robin three-wheeler and the Scimitar sports car. Unfortunately the company relocated to Cannock in 1998.

Tamworth's vibrant history shapes the town to this day and residents are proud of our heritage. The historical buildings are a clear reminder of the past and an aspiration to the future prosperity of the town.